Lillard fuels speculation about his future 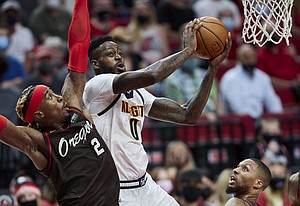 One day after Denver bested the Portland Trail Blazers in six games in the opening round of the NBA playoffs to advance to the Western Conference semifinals, Blazer Coach Terry Stotts and the team announced they have decided to part ways.

“I have the utmost respect for Terry and what he has accomplished these past nine seasons,” Neil Olshey, the team’s president of basketball operations announced Friday. “This was a difficult decision on both a personal and professional level but it’s in the best interest of the franchise to move in another direction.”

Stotts completed nine seasons as head coach and led the team to eighth consecutive postseason appearances.
In Denver’s series-clinching 125-115 victory over Portland on Thursday night, Nikola Jokic led his the team with 36 points. The Nuggets trailed by 14 points in the third quarter but rallied down the stretch, outscoring Portland 28-14 in the final period.

Rumors about Stotts’ future with the Blazers began swirling last month,, but the team’s elimination by Denver sealed his fate.

Among the possible candidates that Portland may consider: Los Angeles Lakers assistant (and former Brooklyn and Milwaukee head coach) Jason Kidd, and ESPN analyst Jeff Van Gundy — whose last NBA coaching gig was with Houston in 2007.

The new coach, whoever it is, will certainly be lured by the chance to work with Damien Lillard, one of the game’s dynamic scorers.

But Lillard fueled speculation about his own future in Portland following the elimination loss to the Nuggets. He posted a photo of himself in street clothes at the Moda Center. The caption that he added quoted the late rapper and activist Nipsey Hussle.

“How long should I stay dedicated?” he wrote. “How long til opportunity meet preparation?”

-Associated Press contributed to this article