Election Aims to Alter School Board

Two Black candidates in the running 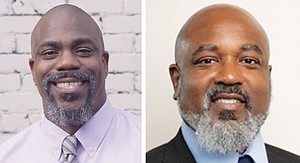 Two Black candidates are in a strong position to win election to the Portland School Board in a May 18 vote-by-mail election, which if successful would add a third person of color to the seven member panel, a significant development for increasing the representation of minority families in Portland, and follows the election of a majority of people of color on the Portland City Council last year.

The contest for two open seats on the Portland School Board brings Gary Hollands and Herman Greene, both esteemed leaders from the African American community, running in zones covering north and northeast Portland but elected at large. If successful, they would join Michelle DePass, the only Black board member currently serving Portland schools.

Greene said if the school board is to be truly representative, a safeguard for policies that advance the education of minority students, it has to “Make sure we are really telling the truth about our history, about where we came from and how we got here in order to advance where we’re going.”

“We will have three people of color on the board,” Greene said. “It takes four votes to get something moved, but that being said, there are several people on the board who have strong emphasis to make sure there are advancements in the BIPOC (Black, Indigenous and People of Color) community.”

Hollands agrees that increasing diversity on the board will make a huge difference, bringing multiple perspectives to the table and meaning that any new policy the board adopts will be more robust.

“It would send a strong message that these are the representatives the community wants to see, and it sends a message to the district, and we hope will be a turning point, a small part of starting to chip at that wall of systemic racism,” Hollands said.

Both Hollands and Greene have picked up major endorsements, including a coveted backing from the Portland Association of Teachers which usually carries significant weight, and including widespread support from other leaders in the African American community. In all, a total of eight people are running in three school board seats.

Sherman said he’s always been interested in politics and believes the school board needs to hear from younger voices. One of his priorities is adding high school counselors to assist students with their future goals. Logan states on her website that she doesn’t see much hard evidence for either a COVID-19 pandemic or climate change.

According to PDX Monthly, Greene, the pastor at Abundant Life PDX Church, stepped into the race as advocates for the Black community were in “a big frenzy” earlier in the year, recruiting candidates because no Black community had filed midway through the signup process.

“For the past 20-plus years I have committed myself to make sure that our minimalized, marginalized and underserved communities get heard,” he said. “I want to make sure that the Black and brown voices in our community, the ones historically left out of conversations, are brought to the forefront.”

Greene said one of his chief concerns is racial bias in standardized testing.

“I don’t believe standardized testing is the way to go, especially when it comes to children of color,” he said. “We’ve got people coming into office that realize how teaching history to our kids is not acceptable, teaching from one culture’s perspective to the deficit of other cultures.”

He also wants to see more financial transparency when it comes to school board bonds.

Hollands' only opponent is Daniel Rodgers, a family physician with the Portland Clinic, who credits public schools for his academic foundation, but believes many areas in Portland Public Schools need improvement. Zone 5 incumbent Scott Bailey chose not to run.

A small business owner and executive director of the nonprofit Albina Sports Program, Hollands said he decided to run for three reasons: He wants to see more vocational offerings in schools, more diverse membership on the board, and improving proficiency levels. His endorsements include every single school board member, including chair Edith Lowery, three state senators and the president of the Portland NAACP, among others.

“Back when I was a kid, there were a lot more CTE (Career and Technical Education) courses, all the way down through middle school,” he said. “But as I am raising my kids, those courses are no longer available for middle school and it’s dwindling for high school kids. We need to expand CTE course offerings.”

Hollands said the Portland School Board needs to “Represent the kids we serve. Right now, a lot of kids are not seeing themselves in the educational picture. I want them to see themselves in that picture and also have (youth) representation on the board.”