Will face Denver in opening round 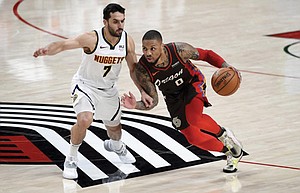 It will be the sixth seeded Portland Trail Blazers versus the third seeded Denver Nuggets in the opening round of the Western Conference NBA Playoffs. The date and time for the first game of a best of seven series was pending on Monday, but likely to start on Saturday according to a preliminary schedule.

The same two teams finished the regular season on Sunday when Portland scored a 132-116 victory. The win gave the Blazers their eighth straight playoff berth, the longest active streak in the NBA.

The Nuggets, guaranteed a spot in the playoffs going into the game, held their starters to limited minutes. Nikola Jokic had 21 points in the opening half then sat for the rest.

Last season, the Nuggets went to the conference finals for the first time since 2009 but fell to the eventual champion Los Angeles Lakers.

The Blazers played the Nuggets in the second round of the 2019 playoffs. Portland won in seven games to advance to the Western Conference Finals, but fell to that season’s NBA champion, Golden State.

The Nuggets expect a different Portland team this time around.

“They don’t have the same team. Nurk didn’t play that time. They had Rodney Hood, they had (Al-Farouq) Aminu, so it’s not the same,′ Jokic said. ”There’s a core that’s the same but everything else is not the same.”