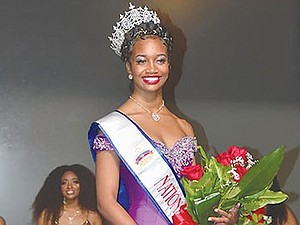 Aceia Spade is helping put Oregon on the map after being crowned National Miss
Juneteenth.

The 17-year old from Eugene won the national title during a pageant held Oct. 16 in Tulsa, Okla., coming the same year that the United States made Juneteenth a federal holiday and Oregon made it a state holiday.

Spade’s platform for the scholarship pageant was equality. She spoke about being a voice for other Black girls and being part of a positive movement in the Black community, bonding with others like her. She credited her ancestral roots for moving her spirit to compete in the contest.

Spade was supported by the Juneteenth Oregon organization, founded by the late Clara Mae Peoples, a retired Black educator and school counselor who introduced the tradition to her co-workers in Oregon back in 1945 when she moved from Muskogee, Okla. to Portland to work at the Kaiser Shipyards. In 1972, Peoples initiated Portland’s annual citywide Juneteenth celebration with the help of the late beloved Mrs. Ora Green, officials said.

The holiday is celebrated annually on June 19th, which marks the day in 1865 that the Emancipation Proclamation was read in Galveston, Texas.