A Black Doctor for Better Health 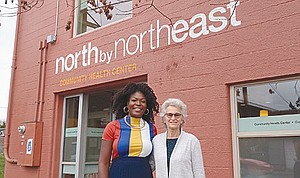 It’s no secret that in Black communities African Americans have not received the same level of medical care as whites, and suffer accordingly.

Other disparities find Black Americans are more than twice as likely as whites to die of diabetes, and also have higher rates of the disease, at 13.4 percent of the population as opposed to 6.4 percent for whites. High blood pressure and asthma are also much higher among Black populations.

Dr. Gina Guillaume, who this week becomes the first Black medical director of the North by Northeast Community Health Center (NxNE) in northeast Portland, has made it her mission to empower patients of color to take control of their health.

A native of the Bahamas who received her medical degree from Howard University and who completed a fellowship at Harbor UCLA Medical Center to concentrate on community medicine, Guillaume wants her new role to help create spaces for Portland’s Black community “to grow healthier, not only physically, but mentally and spiritually,” she said.

Research shows that when Black patients get to see a Black doctor, it can lead to better health outcomes. When patients get culturally competent care, not only are they more likely to follow the care steps, but they’re more engaged, health experts say.

North by Northeast Community Health Center (NxNE) founder Dr. Jill Ginsberg (right) welcomes Dr. Gina Guillaume to Portland to become the clinic’s new medical director. Ginsberg had been in discussions with her board and staff about transitioning to a Black physician leader as the clinic grows.

NxNE has already made history as Oregon’s only medical facility devoted to African American and Black health. The center was founded in 2006 by its current and outgoing medical director, Dr. Jill Ginsberg, a white physician, and the late Black pastor Mary Overstreet-Smith, a Portland legend known for helping feed and clothe community members in need.

Ginsberg said the new doctor is sure to please patients who often say they love seeing the diversity in her staff, people who look like them, when they come in for their care at NxNE.

“It’s part of my personal commitment and our commitment as an organization in serving the Black community, Ginsberg said.” I am so excited to welcome Dr. Guillaume. She is a brilliant physician, a passionate advocate for her patients, and is outspoken about the role of racism in health disparities.”

In America, one only has to look at medical histories to see evidence of lower levels of healthcare for Black Americans and the mistrust that un-even treatments have ensued. It was only in 1966, that hospitals were desegregated because of the threat of loss of federal funds from Medicare and Medicaid, according to the New York Times.

Guillaume pointed to other medical care failures for Black Americans like the “Tuskegee study” where Black men were studied for the effects of syphilis in the 1930s and ‘40s but were not given treatment when it became available.

“So many other things happened, like the sterilization of Black women in Mississippi, where Black women were tricked into signing paperwork for an appendectomy but it was for a hysterectomy,” Guillaume said.

In an interview with the Portland Observer, she also talked about the case of Henrietta Lacks, the Black woman whose unique cells, called HeLa tissue, collected when she had cancer back in the 1950s, are still used to study the effects of toxins, drugs, hormones and viruses on the growth of cancer cells without experimenting on humans. The Lacks family recently filed a lawsuit against Thermo Fisher Scientific, which sells a commercial line of HeLa tissue, accusing the company of profiting from Lacks’ “stolen” cells.

“All of this has created a lot of distrust within the Black community. It’s underserved and they don’t get a lot of respect in a health care office sometimes, all of that in addition to marginalization and experimentation on Black people as well,” Guillaume said. “I just want to stress that it’s not accidental.”

Guillaume sees healthcare as so much more “than a 15 minute session” in a doctor’s office. She spends that extra time to get to know staff and patients, for example, and works with other community organizations to improve overall health.

“I went into medicine to empower communities,” she said.

Guillaume said she’s also interested in trauma informed care, recognizing the work of others in the field, including Oregon Health and Science University.

“It’s something we don’t talk about, but before their 18th birthday, children may be exposed to different forms of trauma, including abuse or parents incarcerated,” she said.

There are at least 10 kinds of trauma, Guillaume said.

“Trauma and stress impact our health as well and I hope to incorporate in Portland how to screen for childhood trauma and reduce chronic stress,” she said.

Guillaume also knows that racism creates stress and low-quality living conditions can have a great effect on a person’s health.

“If you are in a marginalized group and don’t have access to quality food and clean water or safe and clean housing, of course it will negatively affect your health,” she said. The coronavirus pandemic is also on her agenda, and Guillaume hopes to correct misinformation about and mistrust of the COVID vaccine.

As part of her hiring process, Guillaume said the whole staff at NxNE was invited to join her for lunch, and though she’s only been to Portland twice, she knew she’d found her medical home.

“I loved the space and the intimacy, and that it’s not a large corporation that overshadows your interests,” she said. “I appreciated the tight knit feeling and also the people. I felt like I was talking to my cousins, and I fit right in. I left that meeting and knew this is where God needed me to be.”