“Gloria” deserves to be seen live 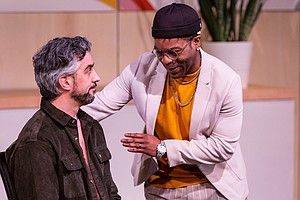 In a time when folks may feel hesitant to reenter the world of theater, Profile Theater's excellent production of "Gloria" offers as good a reason as I can imagine. It's urgent, unnerving, funny, intense, and deserves to be experienced live.

Given the play's shifts in tone, from bitter comedy to thriller to social commentary, it's best to go in without too much of a head's up about the plot, so I'll avoid spoilers out of respect for the material. I'll focus on giving you reasons to experience this show for yourself.

Playwright Branden Jacobs-Jenkins is a rising star in the world of theater; just 37, he and his seven plays have garnered an array of awards and honors, including a MacArthur Genius grant in 2016. "Gloria" was a finalist for a Pulitzer Prize in 2016, and was described by the committee as "[a] play of wit and irony that deftly transports the audience from satire to thriller and back again." Profile is offering Portland audiences their first opportunity to see this particular play.

In my view, "Gloria" is best appreciated as a slightly more extreme version of what one commonly finds in many workplaces; the dialogue at times expresses more than people would say out loud, but that is not to say that the points of view expressed aren't found in your office (or the one you worked in before the pandemic moved you home, if it did). The first act is set in the offices of an unnamed New York magazine (the playwright happens to have worked at The New Yorker for a time) and offers windows on the ambitions and resentments of several characters, particularly three editorial assistants who are in their 20s and are hungry, dissatisfied, and manifesting their ambition in contrasting ways. These three trade barbs in the presence of a resented intern and in earshot of an editor who we don't see but who we observe in other ways (including a look at her vomit) and two employees with longer histories at the magazine but nothing resembling what any of them would call success.

The events of the first act give way to scene changes that allow the characters to engage in reactions to those events that reveal much about the characters themselves and about how actual human experiences quickly become commodified. To say more won't serve your experience of the action; I'll say only that staying engaged in this talky play will spark discomfort and reflection that capitalizes on the shared space that is theater's best asset. It's quite possible that you'll be troubled by not only the character's reactions, but by your own--and it will be good trouble.

The production is deftly directed by Josh Hecht, with a versatile ensemble cast that shifts meaningfully through different roles. The office action somehow resonates even more unsettlingly in the face of the pandemic, allowing the audience even better distance for wresting with the questions the play serves up. What are the benefits of sharing space in an office? Are they real or imagined? Who is to blame for the shifts in culture that divide millennials from their bosses, and how are they impacting what is possible? What stakes drive each character's choices, and what broader stakes do they point to?  Which dangers are actually the most acute?

This production fulfills Profile's mission to whet the appetite for more work of this particular playwright, whose wit and originality feel current and also prescient. Among other things, I was struck by how this young Black playwright grapples with racial dynamics consciously but mainly indirectly, making use of awareness of his own social location but in a way that has the potential to spark better awareness in audience members whose social location differs from his own. One can't ask for more than that.

"Gloria" will play at the Imago Theater, with appropriate safety precautions, through Jan. 30.