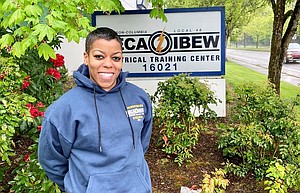 Becoming a union electrician has opened doors for Peter Chimuku and his family.