Seeks ‘reset’ on pandemic and his presidency 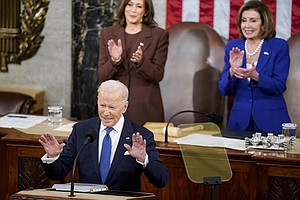 “Let’s use this moment to reset,” he said.

It was a phrase that applied to much more than the pandemic.

After a first year that saw his most ambitious plans stall and his public approval ratings plunge, Biden delivered an address that sought to turn the page and prepare his party for midterm elections in November.

He did not mention the words “build back better,” the name of his stalled legislative agenda, instead talking about “building a better America.” He insisted he would confront inflation, promising that he has a “better plan” to reduce cost increases than Republicans.

He acknowledged that Americans are “tired, frustrated, and exhausted” as he marked a “new moment” where the coronavirus will be more manageable and masks will be required less often. He did not take credit for fulfilling his promise to end the country’s longest war, eliding any mention of the chaotic U.S. withdrawal from Afghanistan.

Biden instead focused on a new war in Europe, where Russia invaded Ukraine days ago, bringing to bloody life the global battle between autocracy and democracy that he’s often warned about.

“While it shouldn’t have taken something so terrible for people around the world to see what’s at stake, now everyone sees it clearly,” he said.

Instead of his usual cautionary words about the expanding power of dictatorships, Biden said that “democracies are rising to the moment, and the world is clearly choosing the side of peace and security.”

In a flourish that wasn’t in Biden’s prepared remarks, he issued a warning to President Vladimir Putin as he rattled off a list of sanctions intended to undermine Russia’s economy as punishment for the invasion.

“He has no idea what’s coming,” he said.

Even though U.S. troops are not being deployed to fight directly in Ukraine, the war could still have ripple effects that drive up gas prices. Biden promised to limit the effects and emphasized the need to confront Putin.

“When dictators do not pay a price for their aggression, they cause more chaos,” he said. “They keep moving. And, the costs and threats to America and the world keep rising.”

Some lawmakers wore yellow and blue outfits or pinned ribbons to their lapels to show their support for Ukraine. The Ukrainian ambassador to the U.S. sat with first lady Jill Biden, who had an embroidered appliqué of a sunflower, the country’s national flower, added to her blue dress.

Few presidents have had such urgent foreign and domestic crises fomenting at once, so early in their tenure, and with the nation deeply polarized on so many issues.

Biden tried to draw a connection between the two as he appealed for Republicans who have spurned him at almost every important turn to now join him in common cause.

It will not be an easy sell as just one speech is unlikely to have any dramatic impact on how Americans view Biden’s job performance.

But Celinda Lake, a Democratic pollster who worked for Biden’s campaign, said the Ukraine conflict has created an opportunity for the president to showcase his strengths on the international stage.

A glance around Capitol Hill on Tuesday revealed mixed progress.

Although nearly 2,000 people are still dying every day from the coronavirus, masks were made optional on Capitol Hill in time for the speech. Attendance was less limited than last year, when Biden spoke to a joint session of Congress a few months after taking office.

But law enforcement re-installed a security fence around the Capitol “out of an abundance of caution” because of concerns that demonstrations that could disrupt the city. The fence was last in place in the months after the Jan. 6 attack on the building as Trump’s supporters sought to stop the certification of Biden’s election.

Biden repeated his call to pass voting rights legislation, but he spent more of his speech singling out politically popular proposals such as limiting the cost of prescription drugs.

And he plans to continue promoting the benefits of the $1 trillion bipartisan infrastructure legislation that he signed into law last year, though he broke the plan down into some of its most popular components rather than pitching a bill that was in effect too big to describe.

Biden will follow the State of the Union by traveling to Superior, Wisconsin, which is home to the 61-year-old Blatnik Bridge. More than 33,000 vehicles use the bridge daily to cross the St. Louis Bay, even though its deteriorating conditions mean that large trucks are prohibited. This is a challenge because the bridge is a key connection to Duluth, Minnesota and its port, the country’s largest freshwater hub for international and domestic cargo.

It is part of a vexing balance for him to strike, with his attention focused on the rapidly unfolding war in Ukraine, and the prospect that it escalates into a much larger conflict, and persuading Americans that he also has trained his focus on issues closer to home.

Only 29% of Americans think the nation is on the right track, according to the February poll from The Associated Press-NORC Center for Public Affairs Research.

Biden’s approval rating has also fallen to 44%, down from 60% in July.

So the president spent the evening essentially asking for a fresh start, born of the most serious conflict with Russia in a generation, and another chance to explain his domestic agenda.

“He’s got his back to the wall, and he’s put his party’s back against the wall,” said Whit Ayres, a veteran Republican pollster.