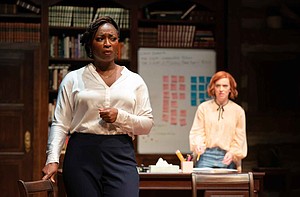 Having now made my own final trip to Ashland this season, I heartily recommend that you make the effort, too—particularly to see the two final shows to open.

“King John” is the show I would most have hated to miss this season.  That’s saying a lot, since I can’t claim to be a fan of Shakespeare’s history plays, which are always dense with political battles that are a fair distance beyond what I know I am motivated to absorb. But director Rosa Joshi has a gift for transforming the Bard’s histories into the most riveting theater which also manages to evoke with surprising clarity the misuses of power that plague us in the present.  Only Joshi can keep me on the edge of my seat with material like this.

A piece of how Joshi does this is by engaging actors who we don’t normally see in these hyper-masculine, war-driven stories—that is, a very diverse cast of female and non-binary artists.   The production was mounted in conjunction with upstart crow collective, Joshi’s long-standing project with cast members Kate Wisniewski (a mercurial King John) and Betsy Schwartz (seen here as the dangerously self-assured Lewis) that has for 16 years produced strong productions of Shakespeare’s histories with casts of female and non-binary artists.  Joshi and her artistic partners are not so much saying something about gender as they are capitalizing on what these artists can bring to these hyper-masculine stories about power and violence and intrigue and unchecked ambition.  They present male characters as male, but don’t underline the point; there are no fake beards in evidence, and there is no artificial lowering of voices.  Yet the artists capture things in breath-catching ways—a battle scene broken down to the elements of breath and falling and repetitive motion, for example, or a king whose petulance is captured in the way he curls his body on his throne.

The cast is phenomenal and consistently strong.  Most actors are inhabiting multiple roles and all participate in collective scenes where their bodies function to capture a sense of the movement of armies and political factions.  Jessika D. Williams chews up every scene as the Bastard, an ambitious opportunist who thinks he can capitalize on proximity to power but who often registers the most astute response to its manipulations.  Brenda Joyner is heart-breaking as Arthur, a young man who is destined to be a political pawn.  Lisa Tejero as the Cardinal conveys brilliantly how a religious leader employs potent symbols like weapons.  Aysan Celik communicates the fury of Constance, a rare female character, with movement as much as with words.

The entire cast works together to convey a sense of how actions and rash decisions of the powerful reverberate among those with less agency; how violence spreads exponentially; how justifications shift as body counts rise.  The production makes smart use of projections, lighting, and costume design to realize the ideas with specificity.  In the end, whether or not you want to concern yourself with the historical specifics of the story, this production has left you with a visceral sense of the themes important to the story.  It’s as exciting an experience of theater as one can hope to have.

“Confederates” isn’t as successful, but for complicated reasons that still counsel engagement.  Playwright Dominique Morisseau, working on a commission from Penumbra Theater and OSF as part of its American Revolutions United States History Cycle, was invited to create a work about the Black experience of the Civil War and chose to focus on the experience of Black women.  Inspired by Dr. Joy DeGruy’s work in explicating what she describes as Post-Traumatic Slave Syndrome, Morisseau produced a set of parallel stories set 160 years apart, centering a current-day Black woman professor, Sandra, and an enslaved Black woman, Sara, who spies for the union army.

I say “parallel” because that is what the playwright clearly intends—the women share similar attributes, including that both must navigate a world in which the expectations of them feel functionally impossible, where their agency and freedom are very specifically impacted by the actions of a Black man, a white woman, and a Black woman.  The dangers Sara faces are concrete, physical, and immediately life-threatening; she seeks to support the war effort for what she believes will be her liberation, yet her brother Abner thinks that is men’s work, her white mistress and former playmate Missy Sue seeks to exploit and seduce her, and an enslaved woman, Luanne, who sleeps with the master, jeopardizes and complicates Sara’s aims.  Meanwhile, Sandra faces constant challenges to her agency and dignity.  A Black student, Malik, believes the grade she has given him reflects favoritism toward white students; her white student assistant, Candace, offers support that feels like sabotage; and a younger Black colleague, Jade, questions Sandra’s solidarity in a tenure fight.  As things play out, Sandra comes to suspect that any one of the three could be responsible for an act of harassment—a period photo of a Black wet-nurse with a white infant at her breast, but photoshopped with Sandra’s face and posted on her office door.

Both stories play out on parallel stages, with the same actors pivoting between the roles of Abner and Malik, Missy Sue and Candace, and Luanne and Jade.  The tension and the overlaps between the stories increase and heighten, until the simple sets for each begin to merge.  Morisseau means for us to notice, as she did in a discussion of the play in the New York Times, that the two Black women protagonists are “united in being the most socially expendable.”

The play is strongest in telling Sara’s story.  Erika Rose embodies Sara’s power, tenacity, and fear, conveys the sheer athleticism necessary to navigate all the attempts on her life and safety and to fight for agency over not only her life but over self-definition.  Morisseau succeeds in presenting this enslaved character as much more than a tragic figure, even employing humor strategically as highly resilient people do.  She wants us to know that enslaved people were more than tragic victims, that they fought back strategically and well.

The parallels with Sandra’s experience don’t always connect.  My own experience as a Brown woman leaves me little room for doubt that Black women face struggles like those depicted here—the sense that anyone can say anything about you, do anything to you without much or any risk.  Yet the play doesn’t grapple well with how Sandra’s exercise of her own power plays into the dynamics of her situation.  There is no justifying what she experiences, and I don’t question that institutions like these peculiarly deny justice to Black women.  But Sandra has options that Sara does not, and how she exercises them feels underexamined.

There is the additional problem of audience.  I saw the play, as I often do, in a very predominantly white audience at a theater whose institutional dynamics I know well from the inside; indeed, they have landed hard on my own Brown body.  Morisseau’s use of humor in depicting the situation of these Black women evoked laughter, but I was not persuaded that that laughter indicated recognition—which contributed to my own disinclination to join in the laughter.  I might well have felt different about it in a different audience—a problem not of Morisseau’s own making.  There aren’t easy solutions for BIPOC artists to exercise agency in telling the stories they want and deserve the opportunity to tell on stage.

All that said, Morisseau’s provocative play, full of good performances, and intelligently directed by Nataki Garrett, deserves an audience.  Stories like these merit an audience, and some practice in the telling and in the listening.